“Mmmh.” Vilém nodded his head and took a few puffs on his elegant wood pipe. His gestures were slow and controlled and he seemed almost absent, as if immersed in a deep meditation. Roland, on the contrary, fidgeted nervously in his seat.

“Did you hear what I said? This whole thing is getting on my nerves.” A grimace of despair appeared at the corners of Roland’s mouth. Vilém turned his head towards his friend and smacked his lips a couple of times.

“Calm down, Rol. I already told you: the programme can not be stopped.” He lingered over the word not on purpose, while closing his eyes and languidly waving the hand with the pipe, which produced soft circles of smoke. “This is our universe, now. There’s no way of going back.”

Roland felt an inner sense of repulsion towards Vilém’s presence. They had shared the same circle of acquaintances for a long time and the guy was undoubtedly smart, but he had a manner of talking that often peeved him, being something in between the clarity of plain observations and the sharpness of radical statements. Roland, on the other hand, was prone to dramatization and rhetoric.

He tried to ignore Vilem’s words and checked his watch: it was still striking 01:01. How is it even possible? he asked himself with a feeling halfway between dismay and boredom. He felt like he had been kept there for decades. In that moment, he realized that he was actually starting to lose the track of time, and this thought filled him with terror. It was so convenient to divide reality into past and future: this concept was the perfect nest for his fascination for death and allowed him to nurture nostalgia. But since the programme – as Vilém insisted to call it – had been launched, all his certainties had been shaken more than a little and they were now on the verge of cracking down.

The light kept on flickering on and off and the colours chased round endlessly. It was difficult to concentrate on a single spot, because all the elements continuously shifted in and out of focus. Most of them looked like some kind of organic matter and it was impossible to decipher their scale: they could be galaxies as well as micro-cells; hard to tell. At times, a figure appeared, but it soon vanished within the mesmerizing whirl of shapes and shades. It was like being in a gigantic kaleidoscope without the option of gazing away. This gave Roland nausea, while his companion seemed to feel perfectly at home.

“Listen,” Vilém finally said with a dry tone of voice, in contrast to his friend’s growing impatience, “it’s all a matter of attitude. The programme is here to stay, I’m sure you’re aware of that. And we can’t dismiss it, because we’re part of it.” They were sitting under a huge tree, whose roots looked like an alien creature’s tentacles, and his voice produced a strange echo that made the leaves faintly tremble upon their heads. “The fact is: the programme is not better nor worse than the old, good traditional vision – I would say it’s rather its natural evolution. By trying to resist it, you will only create trouble to yourself. Like, if you tighten the muscle before a buttock injection.” He accompanied the last sentence with a thinly-veiled smirk.

“Ha ha. Very funny. The fact is, I can’t stand this permanently changing environment. The referent ain’t optionally real… it must be necessarily real!” Out of frustration, he tossed a small rock in front of his feet, which immediately got swallowed up by the dense electromagnetic current flowing all around them. “At least, this is what I used to believe. It’s a big chaos out here.”

At that point, Roland couldn’t help thinking about his mom. His mind went to that picture of her, taken in a winter garden when she was aged five: he cherished that image above all others. After his mother passed away, Roland began writing a diary in the attempt of describing the pain caused by her loss. He used to write on paper sheets that he himself prepared by tearing pages in four smaller pieces, of which he scrupulously kept a reserve on his desk. Psychoanalysts say that the grief following the death of a parent takes about eighteen months to heal. Roland kept his diary for almost two years.

Vilém, for his part, had not had an easy life; in his youth, he lost all his family and was forced to leave his country, fleeing on the other side of the ocean. He had in fact lived most of his years as a migrant. However painful, this experience had proved to be particularly significant: he was aware that only people like him, alone and unconnected from every kind of bond with a specific land or place, could consider themselves truly and deeply free.

“Look!” Vilém exclaimed all of a sudden, pointing right in front of him. Roland, abruptly awaken from his thoughts, realized that Vilém had in the meanwhile consumed all the tobacco in his brown pipe. He had also adjusted his double pair of glasses – he used to wear one pair on the tip of the nose, the other on the forehead, and to change them of place whenever he needed to switch from distant view to reading, and vice-versa. Roland tried to scan the area indicated by Vilém’s finger. At first he couldn’t see anything, due to the strong light all around them, that now was of an acid green colour. Roland used to disparage colour, as always looking as if it had been added later, while Vilém loved to argue that colours might become a form of thinking, an Esperanto that could substitute for written and spoken language and perhaps even bridge the realms of art and science. Bullshit, thought Roland to himself. As his eyes finally got used to the brightness, he could spot a blurred red shape gently floating on the glass-like, sparkling watery surface, and by looking better, he could see it was a pair of swimming trunks with legs and torso and arms and all the rest of a male human body around it. A young man was bathing in the river, and one could say he was enjoying it in spite of the wild nature of the stream, as he often plunged his head into the waves and let the current transport him down towards the valley with no resistance.

The two older men watched the boy for long time, both fascinated and perplexed by his tranquil and spontaneous behaviour – the one of an animal – and they followed his figure becoming smaller and smaller until the red spot of his swimwear disappeared from their sight. At that point, Roland plunged his hand into his pocket and took out a small notebook with leather cover and a black pencil. He began writing as driven by a sudden inspiration and he syllabicated every single world in whispers while the pencil screeched along the paper: fi-de-li-ty… re-a-li-sm… ap-pa-ra-tus… in-for-ma-tion. After having filled almost three pages, he started getting undressed: with no haste, he took his shirt, shoes and pants off, folded his clothes with care in a small pile and put his pipe, glasses, notebook and pencil on top of it.

“I got it, Vil!” he finally said while staring in front of himself. “Freedom is still possible. By introducing unplanned human intentions into the programme, you will force it to generate something unforeseen, unlikely and informative.” Roland turned his head towards Vilém and gave him a large, warm smile. His expression was the mirror of satisfaction and for a moment he seemed much younger than his age, as if the muscles in his face relaxed all together. Finally, he dove into the stream. Similarly to a living organism aware of the circumstances, the tide rose all at once and swallowed the man in a handful of seconds. A few bubbles emerged on the surface, popping lazily one after the other, and immediately afterwards the surface solidified, passing from liquid to rocky state in no time.

“Goodbye, my dear.” Vilém murmured, “I guess you were right when you said that language is never innocent.” He stood wearily up, stretched his legs and yawned a couple of times. The room, whose irregular and pointy walls were of blinding white when they came in, was now completely covered with layers of colours, marks and patterns. The man cast a brief look around while reaching for the remote control. Then he switched the programme on another channel, filled his pipe with fresh tobacco, opened the door and walked out in the dark.

This text was written for the book A Rock is a River by Maya Rochat, designed by Nicolas Polli and published by Self Publish Be Happy in September 2017. 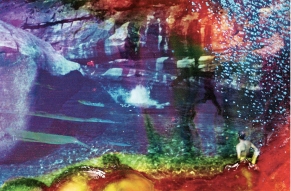 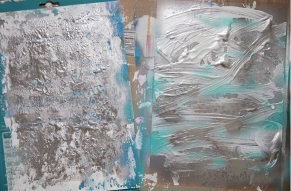 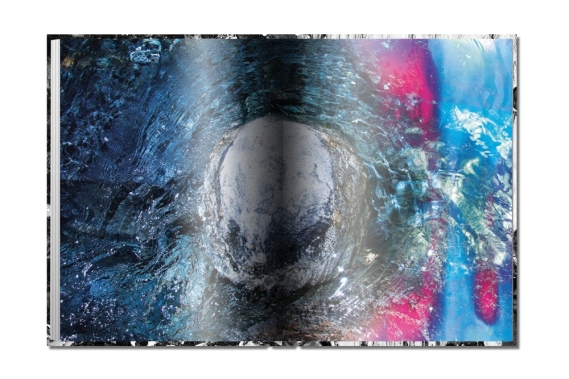